Gail and John Aiken look after the Northern Koanga Fruit Tree Collection which is planted at their home in the Hokianga. They are also seed growers for Koanga and Gail is the Back Order Manager. Over the next year they plan to hold a series of workshops and tours at their farm near Rawene. If you would like to be put on a mailing list for these events please e-mail [email protected] …..

We planted the first trees in our orchard here in the Hokianga in winter 2009 and this summer had  bumper crops of some varieties.  We are just loving having so much fruit.
The season began with Orion peaches – they were ripe from the second week in November and were a wonderful introduction to the bounty to come. They are so early in the season, they fill an important gap. They are smallish, white fleshed peaches and heavy croppers. We ate ours just as dessert peaches.
Next, were the Mary’s Christmas peaches. These are large, white fleshed peaches with outstanding flavour and very juicy. Here in the Far North ours were ripe mid December and lasted until just after the Summer Solstice.
We then had a run of plum varieties – small ,juicy, yellow fleshed Marabellas, large, red-skinned, red-fleshed, Little John’s which were incredibly sweet and delicious. Duffs Early Jewel and then Whakapirau Gold. All beautiful in their different ways and we ate them all as dessert plums as we’re not getting heavy enough crops yet to start bottling and preserving. 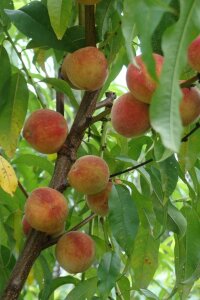 In late January the peaches really began again. We have a tree that we’ve called Jim Armstrong Black which seems to be a variant on the River Peach. It’s strong, healthy and a precocious cropper. Last year we had a large crop but this year its huge (over 600 peaches on one tree!). Its ripening time overlaps with the River and the Christina so we had huge bottling sessions, preserving them for later in the year. It’s been fantastic being able to have fresh peaches as snacks or simply with cream or, even better, kefired or cultured cream. We have peach smoothy for breakfast most days and have been making peach crumble (with an almond topping).
I invested in an ice cream maker so we’ve been making peach and vanilla frozen yoghurt which is really simple to make. We use most of our cream to make butter but always have heaps of yoghurt so it works better for us to make frozen yoghurt rather than ice cream. We blend up a banana, heaps of peaches, a generous table spoon of honey, two egg yolks, a litre of yoghurt, some spare cream, if we have it, and a dash of vanilla. Once its blended we just set up the ice cream maker, pour it in and away we go.
Yesterday, we had the best dessert yet. We made a fruit salad with heaps of peaches, Goldmine Nectarines (also ripe at present and cropping very heavily), Poutu blackberries, wild blackberries, some Whakapirau Gold plums, Early Tioga Strawberries and Red and White Alpine Strawberries. We drizzled some of the juice left over from bottling peaches on top and served it with the peach frozen yoghurt and some kefired cream! It was divine. 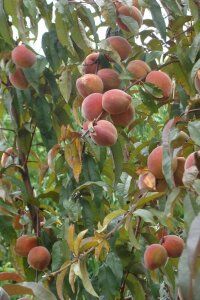 Next was the Arapahoe Red Leaved Peach. This is a stunning tree with deep red leaves – ours is planted in a prominent position on the way into our orchard and usually attracts positive comments from people who see it. That gave us a huge crop of red skinned, yellow fleshed peaches with a very intense flavour (my favourite I think although its a hard call).
Our Hokianga Golden Queen is small yet but gave reasonable crop and we had heaps of Matakohe Peacherines.
There are so many advantages to planting varieties that ripen at different times. Just being able to eat fresh peaches from November (the Orion) through to late March / early April (the Batley) is the most obvious advantage and also the preserving can be spread out over time too so that it is manageable. It also spreads the risk if the weather turns bad so even if you loose one crop you shouldn’t loose them all. Brown rot is the big issue up here in the humid Far North and we have been blown away by how resilient the Jim Armstrong Black, Arapahoe, River, and Christina have been. We’ve had appalling weather for peaches (hot, humid, sticky) just as the heavy crops were ripening but have lost very little. We tried to site all of our peaches well so that they have what air movement there is but we were concerned we might loose them anyway as the weather was so awful but so far we haven’t had any significant problems.
Next were the grapes – so many Bishop Pompalier and Niagara that we had heaps to eat, made juice with our steam juicer and made wine with them. 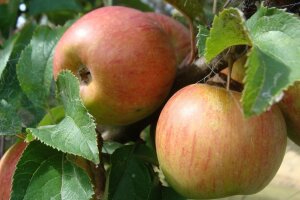 Apples were next. The big surprise this year was an apple we were trialling called Jacqui Sharp. Nice as a dessert apple but a fantastic cooker. Lovely flavour and cooked down to a soft, sweet, fluffy puree. We also tried baking them at they were excellent – soft and fluffy within the skin.
Our apple crops were not large from such young trees but enough to try some of the varieties – we baked some Sturmer – delicious, had Winesap as dessert apples but also tried baking them and they were lovely. The Hayward Wright looked stunning and are lovely dessert apples. 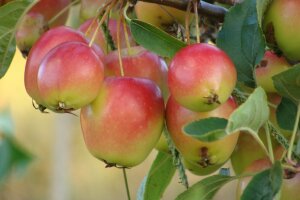 We had huge crops on all of the crab apples – Golden Hornett, Wrights Scarlet and Jack Humm. They looked beautiful. Our biggest cropper so far is Giant Geniton – good as a cooker early in the season and as an eater later and always a precocious cropper so you get good crops from young trees.
Now (in April) we’re seriously into figs. Beautiful sweet black skinned, pink fleshed black figs, stunning Adriatic with its green skin and the surprise of bright scarlet flesh inside.  Small sweet hyndemans, and long amber Kaeo. All beautiful in their different ways.

1 thought on “Summer in the Orchard”